This brief report aired on the Christian Broadcasting Network on April 17.

This song is emblematic of the Golden Rule Pledge.

The Golden Rule Pledge has been endorsed by several evangelical leaders. Here are just three…

Andrew Marin, president of the Marin Foundation and author of the new book, Love is an Orientation, recently wrote to endorse the Golden Rule Pledge. Marin said:

I am a full believer in the Golden Rule Pledge. Instead of taking our kids out of school, we have a unique, and wonderful opportunity to be able to teach the next generation of Christians what it means to peacefully and productively build bridges with our gay and lesbian neighbors.

Bob Stith is the National Strategist for Gender Issues with the Southern Baptist Convention. Bob wrote:

Several years ago I stood outside a church which was being picketed by two very vocal and rabid “Christian” groups. Standing on the sidewalk were also some young lesbians doing their own picketing. The first group became more and more vocal in their opposition and insults. They began telling the young women how despicable they were and how God despised them.

At that point I walked over and told the girls, “I am a Christian and I do believe the Bible says homosexual behavior is sin. But I want you to know what these people are saying is wrong. I want to apologize to you and tell God does love you very much. Don’t ever let anyone convince you He doesn’t.”

I have long thought Christians were missing a great opportunity by not being more vocal in helping to make our schools safe places for all kids. It doesn’t require that we compromise our beliefs. Indeed it can give us a great opportunity that we might not otherwise have.

Who knows but what this could even be the beginning of a movement that will turn the tide of school shootings and violence in the hallways.

Wayne Jacobsen is the publisher of the best-selling book, The Shack. Recently on his Lifestream blog, he wrote:

…many public school students will observe a Day of Silence as a means to protest harassment and discrimination based on sexual orientation or gender identity. It has been going on for almost a decade and many parents who are against ‘the gay agenda’ feel the need to keep their kids home that day, or participate in a Day of Truth that makes sure everyone in their district knows they consider homosexuality to be immoral. Is this the way Jesus would respond.

Perhaps a better way to encourage faith-based students to respond would be to adopt the Golden Rule Pledge. “I pledge to treat others the way I want to be treated.” It allows a pro-active response to sharing the burden to increase mutual respect for all, regardless of our differing points of view.

While she did not endorse the GRP official, Eliza Byard of GLSEN, a sponsor of the Day of Silence, said this about the Goldren Rule Pledge:

The Day of Silence embodies a commitment to everyone being treated with respect — people treating each other as they wish to be treated themselves — and highlights a crucial area of school climate where we currently fall short of that goal. We welcome participation in the Day of Silence of students of all backgrounds and beliefs who recognize and acknowledge this common commitment, and feel that your identification of that common ground is a step forward.

For quick information regarding the Golden Rule Pledge, use this email address: 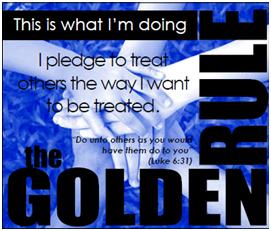 We have the Golden Rule Pledge cards via .pdf file here. This year we have them in various colors and black and white.

Just print them on card stock (or the paper of choice), cut them out and you are ready to go.

Black and white option one

We have the Golden Rule Pledge cards via .pdf file here. This year we have them in various colors and black and white.

Just print them on card stock (or the paper of choice), cut them out and you are ready to go.

Black and white option one